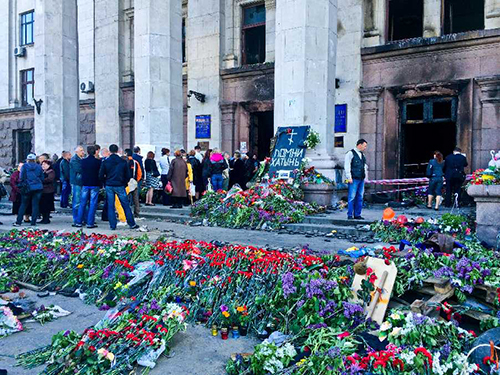 On the night of May 2, 2014 over 40 proRussian activists from the Odessa community died in a fire resulting from street protest clashes between pro-Ukrainian and pro-Russian activists. Less than four days later Duke attempted to meet with ProRussian leaders and activists to establish dialogue and to begin to understand first-hand what their experiences have been and what their needs and values are. 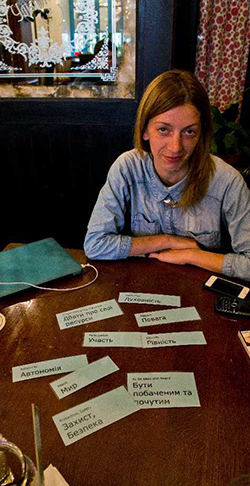 It was difficult to make connection with the group as it appeared the whole community had naturally pulled into itself as a result of the deaths over the weekend. Duke was told that most of the leaders and almost all of the community were either out of town, engaged in funerals or not answering their phones. In the end Duke and interpreter Andrii went down to the Central town hall where the fire and deaths took place and where a few hundred from the pro-Russian community had gathered to mourn their dead. After a few hours 8 Pro-Russian activists (including one who was in the building during the clashes and subsequent fire) met with Duke on a street in Odessa on May 6, 2014.

Earlier in the day Duke also met with a Russian reporter who has been living in the Ukraine for ~6months and who is researching Pro-Russian groups in Crimea and Odessa.
Some of the needs that are important for the Pro-Russian activists:

To Be Seen and Heard

In general they felt the Maidan protests were also a wake-up call for their communities as well, it awoke their own community consciousness and sense of social activism. They now want their values and needs heard just like those heard for people at EuroMaidan, especially because they perceive their needs as different from those expressed by EuroMaidan. They want the same opportunity to express and be heard.

Autonomy – they would like more choice in how money from their region is used and to keep most of it in the region to better the lives of those living in that region. They perceive their taxes (from Odessa region) as supporting Kiev and that not much of that money returns to their region. One person expressed a desire for 70% of funds to be returned to the Odessa region. 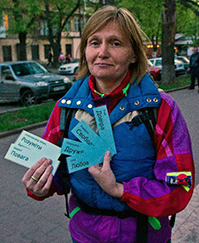 pirituality – They want to protect their church (since it is connected with Russia) from being over-run or given less support than other Kiev-based or European churches. They also want to protect and keep their Russian way of spirituality; and are really worried that if more European values start flooding into their areas that the values of their church will be eroded or lost all together.

Care for Their Own Resources – They want to be able to use their resources in ways that serve their communities. They expressed fear that closer ties with the European Union would affect the value of the hryvnia and that this would result in their having less buying power and adversely affect their ability to buy basic goods for their families.

Equality – They want their rights protected by police and government equal with anyone else in the country and they do not trust that this will happen with the new government. For them they see themselves as fighting against fascism; and against the oligarchy. They would like to see that everyone has more equal access to the resources of the country and not have those resources be mostly used by a few people and their families. 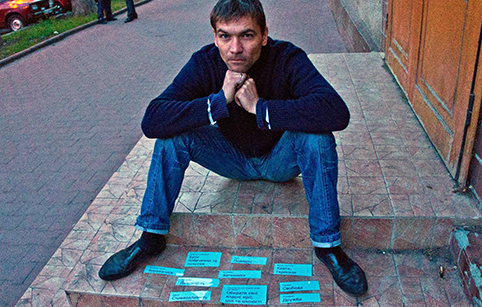 Participation – They not only want to be seen and heard (as described above) but they also want to participate actively in decision-making or at the very least to have their needs be addressed in the same way and with equal weight as they perceive the needs being the basis of government decisions of those at EuroMaidan.

Protection/Safety – They would like to protect their culture and not let it be overrun by the strength or pervasiveness of European/Western culture. They also want to protect their close connection with Russia – most have friends and family in Russia, they feel safe within the context of Russian culture and trust that their values will be upheld within this culture. They feel they have less contact and connection with ‘others’ in Ukraine than they do with those in Russia. 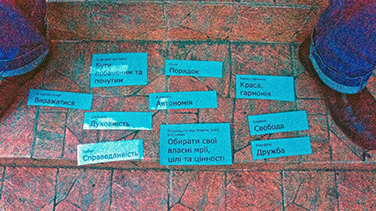 Categories
Recent Posts
Recent Comments
I am the footer call-to-action block, here you can add some relevant/important information about your company or product. I can be disabled in the theme options.
Get In Touch
Copyright Your Business LLC. 2023 - All Rights Reserved
Back To Top
×